Ten days after my second Covid vaccine shot I began re-creating some semblance of my former normal life by going to the supermarket and the hardware store. I went to the market twice and the hardware store three times, and even managed a trip to the wine shop. The following day I showed a little restraint and only visited the model train shop, Office Depot, and Lowes.

It was bound to happen.

When we moved to Paducah, I left behind a rambling 13x13x13’ HO scale model railroad sharing studio space with my art. Actually I did not leave it as much as demolish it, discarding what could not be salvaged, giving away what could not be easily moved, and saving the rest. Model railroading became a thing of the past, and for years my interest was dominated by my art, with significant competition from all things pasta. Several years ago I felt the model RR itch, and seriously considered getting back into the hobby, but I quickly abandoned the notion, believing I was too old to be building benchwork and crawling around under a layout checking electrical connections. There were a host of other excuses I created, all of them seeming quite rational.

Then I did something stupid. I sold a large part of my collection – the locomotives and cars I valued the most, believing I would never be using them again. What happens next is obvious.

I ended up needing a lumbosacral epidural to relieve the back pain I caused by tying to kick myself in the ass.

Once my imagination has succumbed to the lore of the model RR, and this time I am giving in the call and commandeering a portion of the gallery and chunks of my time for the benefit of my imagination and general well-being.

Although I am working at a slower pace, new work continues to pile up in the studio and gallery, which now looks more like a storeroom than a gallery. I’m still all over the place when it comes to mediums, going back and forth between oils, pastels, and watercolor. Recently I’ve discovered a new approach (for me) to work with the pastels. Three paintings ago I began a watercolor painting on a 20×30 sheet of 300lb. cold press paper. After drawing the subject – in this case a large barn – surprise! – I painted the background and then the barn. I was not happy with the sky and couldn’t correct it without making it look muddy and overworked. I decided to try working over it with pastels and was delighted to see how well the paper held the soft chalk. Once the sky was what I wanted it to be I thought why not and proceeded to work the remainder of the painting with the pastels. I was so pleased with the results that I followed up with a second painting using the same approach – a watercolor painting first, and then applying pastel over the watercolor for richer and more vibrant colors than I can achieve with just the watercolors. 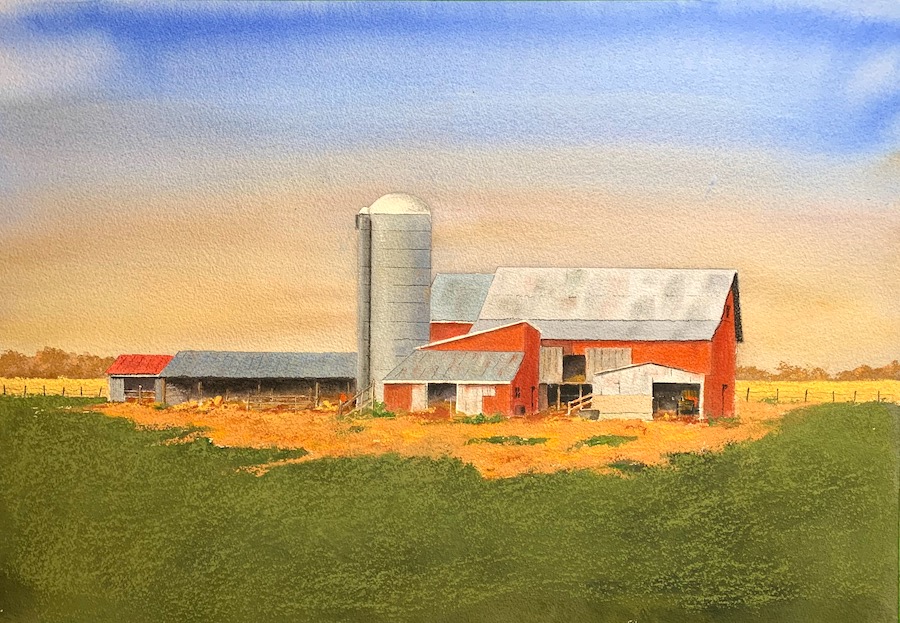