“What am I doing sitting on a pile of trash in an empty city lot behind Fourth Street?”

It was 9 AM on a Thursday morning in the mid 1970s. I should have been attending Medical Grand Rounds, a presentation by the medical residents of interesting cases to the house staff and attending physicians. It was a weekly ritual that I had attended faithfully for the past 6 years.

So why was I sitting on a stack of empty mattresses in the middle of an empty lot? I was drawing the back of a row of dilapidated houses, fascinated by the texture and gritty nature of the composition they created, totally unaware that this would mark the beginning of a 5 year process to reveal an artist tucked away somewhere within me. To say it was pure pleasure would be less than true. Guilt and insecurity were right beside me, asking me “what are you doing out here? You should be at Grand Rounds. It’s ridiculous to think that you’re an artist, or could become one. All you can do is draw small sketches with a Parker fountain pen. Hell, you can’t even paint!” There was no shortage of guilt, doubt and self-recrimination, but not enough to pull me away. Art – pencil and pen and ink drawing – was becoming more than a casual hobby; it was something I felt driven to do. It’s not like I was bored and looking around for something to keep me occupied. This interest in drawing simply crept into my consciousness without any forethought, and once it was established proceeded to grow until it became more of a need than an option or choice. This wasn’t the first time I experienced something like this. In the spring of my first year in college, without my conscious input I suddenly decided I wanted to be a physician and not a pharmacist. Ironically, I was now engaged in a process that, albeit much slower, would take me from medicine to art. But that’s another story. I would end up painting and drawing the backs of buildings throughout my years in Wilmington, and over 25 years later would do the same in Paducah.

The backs of so many urban buildings often stand in stark contrast to their fronts, and are frequently far more interesting because of the nitty gritty texture and disarray. In 1984 the Wilmington News Journal moved their headquarters from downtown Wilmington to a new suburban industrial park, and asked me to do a painting of the old headquarters for a poster to give their friends and employees. Of course I did the back, which was far more interesting to me that the boring façade in front. They loved it, bought it, and then asked be to do the front for the poster. Here are the two paintings – you can decide for yourself. 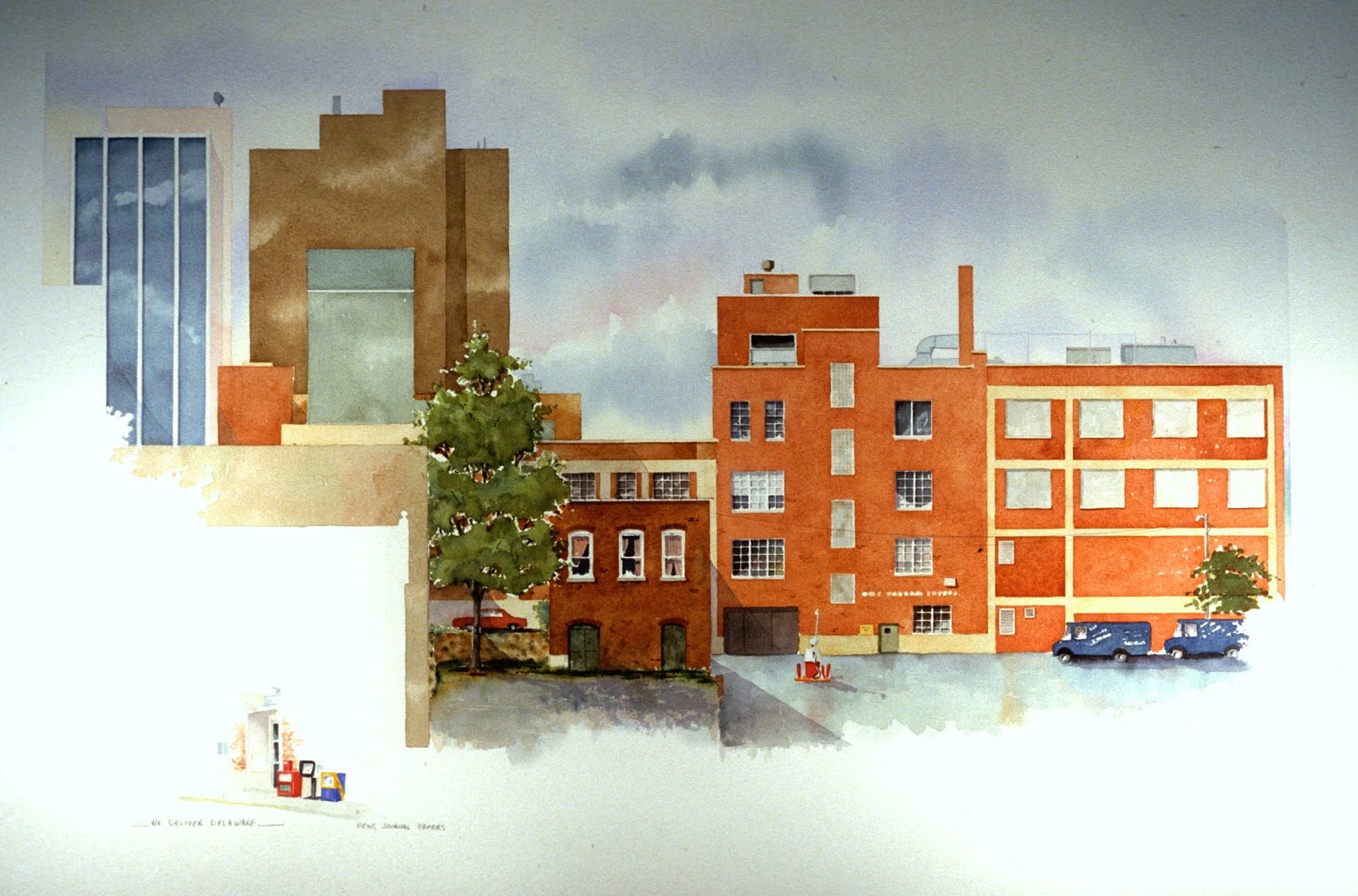 I originally considered calling this post By Their Backsides You Will Know Them. But then I wasn’t sure how people would interpret that.